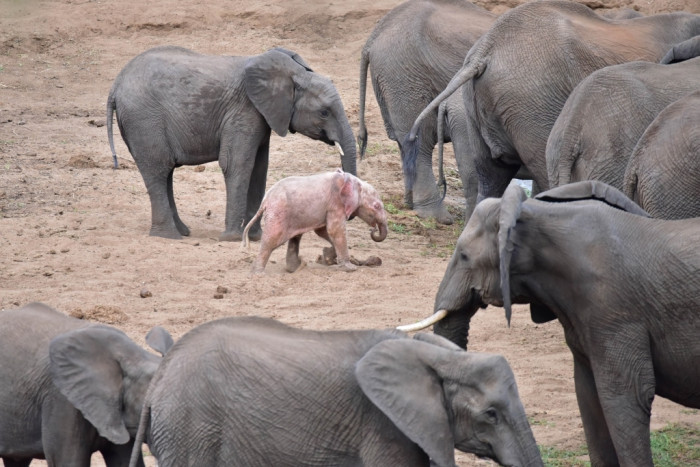 The pink baby elephant frolicks peacefully among his herd

A luck safari ranger, Tim Jansen van Vuuren, was the one who saw the pink elephant as he was leading a group through the reserve. The ranger from Benoni, South Africa was joyous to experience seeing something out of the ordinary.

He recounted how the herd of elephants let the group come near the baby pink elephant and so they experienced seeing him up close. There is potential though that they may never encounter the elephant as they usually move across other neighboring reserves and the area is extremely large.

Tim had been visiting the ‘bush’ for most of his life and had only encountered something like this once. He’s also been working in that environment for about six years and even then, there wasn’t an incident that was close to seeing the pink baby elephant.

A wildlife photographer captured pictures of the elephants beautifully

And another one following the herd

Nature really has a way of surprising us. Being a base pillar of people’s and animals’ lives, it works in very extraordinary ways.

The safari ranger Tim along with the group he was leading was lucky to present when the herd of elephants was traveling. It gave them a glimpse of a rarity and was welcomed to come near them.

The only hope for the pink elephant is that he wouldn’t suffer from the health consequences that come from his genetic mutation. His sticking out is both a beauty and a threat so it’ll be a tough road ahead of him.

Did you enjoy this story about the rare pink elephant? You can share your thoughts in the comments