The Surprising Love Story Between a Cow and a Leopard

Cows and leopards are usually not the best of friends, with the latter sometimes preying on bovines to survive. However, you wouldn’t even be tempted to think that looking at a set of viral photos that have been doing the rounds on social media for nearly two decades now. They show an adult leopard cuddling and playing with a cow, which, if the accompanying caption is to be believed, adopted and breastfed the feline as a cub. The story behind the photos has been exaggerated over the years to attract even more attention, but the photos are real and the relationship between the two animals is a testament to the fact that miracles can happen. 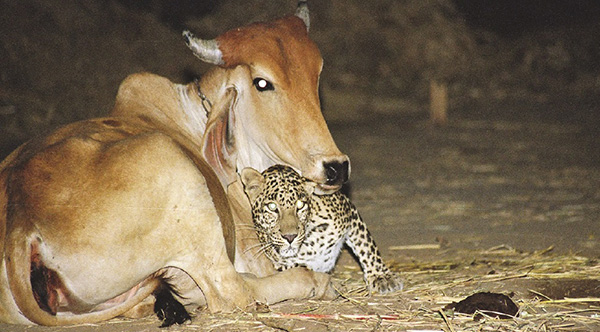 Although the photos in question have been doing the rounds online for 19 years now, they are still sometimes posted as news by pages and websites hoping to make them go viral for the billionth time. The story is most often associated with an unnamed village in Assam, when in reality it occurred in the village of Antoli, India’s Gujarat state.

Tracking a decades-old news story back to its original source is a daunting task, but according to hoax-debunking website Social Media Hoax Slayer, the earliest source appears to be a 2002 article posted on the Times of India website. The original story isn’t as bombastic as the one usually found on Facebook, but it’s still an impressive and rather unusual one.

In October of 2002, the peaceful lives of Antoli’s inhabitants were disturbed by the constant nightly visits of a young leopard that behaved odd, to say the least. Instead of looking for food or simply attacking domesticated animals, it seemed particularly interested in a certain cow there…

“The leopard comes closer…there is anxiety in the air,” the Times of India described the heartwarming encounter. “The big cat slowly rolls over and raises one paw and puts it gently on the cow’s head, and makes purring sounds. The cow lets out a soft ‘moo’ in response and licks the leopard. The leopard, obviously in a playful mood, sits there waiting to be cuddled.” 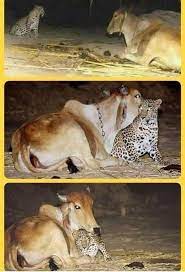 Soon after the unexpected nightly meetings between the cow and the leopard were observed by human villagers, small crowds started gathering on rooftops to see the magic for themselves. And sure enough, on most nights, between 10 pm and midnight, the two animals did not disappoint. However, as the human presence around the village during the visits intensified, the leopard started acting more warily.

“We have been keeping watch, but unfortunately the frequency of the leopard’s visits has decreased,”Rohit Vyas, honorary wildlife warden of Vadodara, said at the time. 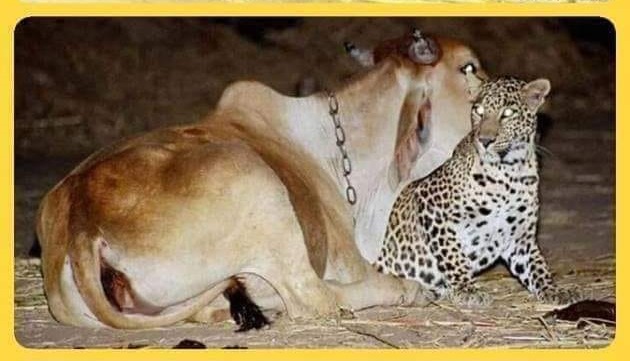 Although most of the posts going around social media suggest that the two animals somehow knew each other, or even that the cow had taken in the abandoned leopard cub, the original source doesn’t mention anything related to that, simply because no one knew how or even if the animals were in fact familiar with one another. A forest conservationist merely suggested that the leopard may have grown up around humans and was familiar with domestic animals.

“Sometimes animal behaviour can get modified,” conservationist H.S. Singh told the Times of India. In this case, probably because the leopard which has passed the sub-adult stage, lives in a rural area and not strictly a wild environment.”